Day 3 of 40 days to Resurrection Day

Abraham’s testing and prophetic statement that “God would provide for Himself a lamb.”

I had a little sheep-herding experience as a kid.  My cousins had a few sheep in a fenced pen, and when they got out, which seemed quite often, sometimes I joined them as we called for their dog and went to round them up.

Thoughts of sheep and lambs take me to the Old Testament.  The history of the Hebrew people begins with Abraham, and he was a shepherd.

The Bible tells us about an old man who left most of his family and all that was familiar to wander an unknown land the rest of his life.   Just because God told him to.

Abraham received and believed some of the most amazing promises.  He became an example of faith.  What does it look like to trust God when you don’t understand the ‘what’ or the ‘why’ but you trust the Who?

It looks a lot like Abraham.  His story begins in Genesis chapter 12.

God’s promises to Abraham didn’t always come quickly to fulfillment.  Some did not come to pass in his lifetime.  And I wonder how he kept the faith?

Sometime in his 80’s, Abraham was told he would have a son and that all of the world would be blessed because of his seed.   Abraham reached 100 years when that son, Isaac, was born, and that’s a long time to hold a promise close to your heart.

The challenge today is to read about God’s extreme directive for Abraham to offer the promised son on the altar of sacrifice.  It is this part of Abraham’s journey that connects us to the story of Jesus Christ in the New Testament.

It was a hard command Abraham heard.  Even more difficult to act upon.  We know the ending to the story, but Abraham carried his heavy heart up the mountain along with the wood and the fire.  I cannot even imagine.

Somehow his faith sustained him even under this darkest of circumstances. Before Abraham experienced the final outcome, he uttered a most profound and prophetic statement.   When Isaac asked where the sacrifice was, the offering they would give, Abraham said:

“God Himself will provide the lamb for the burnt offering, my son.”

The word here for “God” in Hebrew is Elohim, the Creator and Judge.  This is the One who created the plan of salvation from the very beginning; the One who must judge sin because He is righteous and holy; the One who would provide His own sacrificial Lamb because we can never, ever, ever measure up.

This is the God who promised a Savior, a Lamb who would take away the sin of the world.

Though the fulfillment of the promise was long in coming, it came!

I have some promises I am holding on to with all my heart.  I may not see all of God’s promises completed and fulfilled in my lifetime, but I choose to trust the One who made the promise until it comes to pass.

One thing I know.  When God makes a promise, He intends to keep it.  And He will do whatever necessary to do just that. 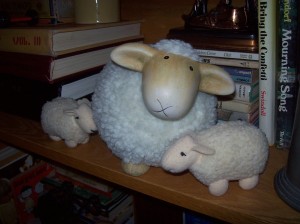 Revised and re-posted from March 2014