It seems like only yesterday though it has been closer to 50 years ago.

I reached to take Sweet  William’s arm, and as I did his muscle flexed. I could feel the strength in it, in him, and I knew I was protected.

I felt the same way growing up with my dad, who was a carpenter by trade. The muscles in his arms were big and powerful from swinging a hammer all day long. With my dad close by, I was  not afraid.

Isaiah prophesied of a coming rescuer,

“Who has believed our message and to whom has the arm of the Lord been revealed?” (53:1)

When Mary went to the home of Zachariah and Elizabeth, she and her elderly relative had a moment of praise and she said,

“He has performed mighty deeds with his arm;”

The arm of God represents His strength.  His power and might come to the aid of His people by the representation of His strong arm.

And in a small village called Nazareth the might of Creator God was nestled in the tender womb of a young girl. At five weeks of her pregnancy, there was evidence of arm buds. Sinew and muscle slowly formed around a tiny bone, and by mid-point of the pregnancy, baby could move his arm to suck his thumb.

The strong arm of God came to rescue us in an astounding way. Who could have expected this?

God wrapped in flesh, blood flowing through a human body. He made Himself like us so He could redeem us by an outstretched arm on a wooden cross.

The arm of the Lord was revealed to us, His love the most powerful strength of all.

There is no other like that. He is Savior Christ the Lord.

The nightly news is full of heartbreak, calamity, death, confusion. Sweet William and I feel the weight of tragedy in the world, in our communities, and among our own friends.

Digging a hole and burying our heads sometimes seems a viable option.

On the other hand, this is November, and I remind myself during this month especially to look for the light in the darkness. And so, I write out my blessings.

Life is hard, no doubt. There will always be trouble and problems. I could focus on that while despondency begins to wrap its bone-chilling arms around me.

Or I could pray for those in need, giving them to the God who is strong enough to carry the weight of the world on His shoulders, who knows what each person needs before I try to tell Him, who is able to do exceeding abundantly above all I can ask for or imagine.

Then I am free to count blessings and look for His gifts. Then I can rejoice and be very glad.

“Indeed, these are but the outer fringes of his ways! How faint is the whisper we hear of him! But who can understand the thunder of his power?”  Job 26:14 NET 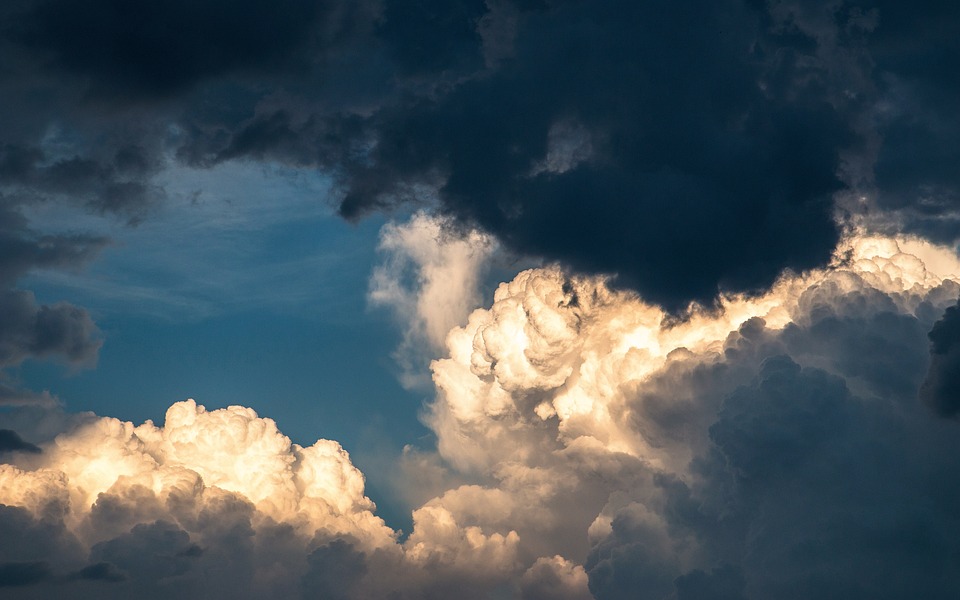 The news reports of winds and waves and power that unnerves us all, a power that is uncontrollable. Predictions are updated as the power directs its own course, and no one really knows where the wind will blow.

I understand that the God of creation made this world in beauty and perfection with all things in proper order for life and health and prosperity. But something went wrong, sin entered the heart of man, and all creation groans under the weight of it.

Yet, God provides grace upon grace, mercies unlimited, and a love that is everlasting. Even when the winds blow and the sea rages, He is God and His dominion has no end.

He is all-powerful and deserves our reverence, our awe of Him who holds all things in the energy of His hand.

Man was given a limited creative power that is wonder-filled when it is used for goodness. Beauty and ingenuity result. But his power unleashed with selfish intent leaves devastation in its path.

One day the Father of creation will make all things new again.

We must bow to the only wise God whose power is perfect, whose goodness is inherent, and who works all things according to His good plan.

Give Him the glory due His name. Trust His heart. Lean into His love. Believe in His salvation.

It is the only safe haven in the power of the storm.

“I am your shield and your exceedingly great reward.” He said that to Abram.

He says that to me.

When I am afraid, He is my protection and my place of safety.

When the road ahead looks dangerous and dark, He promises He will go with me and be the light.

When I feel threatened, He is my defense.

When fire consumes, moth eats away, and the thief steals, He is my portion forever.

When I am hungry or thirsty, He gives me bread that sustains the weary, water from a fresh fountain.

When the burdens are too heavy, He lifts them and offers His own yoke.

When I think I cannot go on, He carries me.

When I falter, fall down, and fail miserably, His grace lifts me, heals my wounds, and gives strength for the journey.

He teaches me, comforts me, leads me. He is loving, faithful, merciful, and full of compassion toward me.

He died for me and rose again to offer me new life for the old one.

I search for what I think will satisfy my longings. Then I realize nothing will fill me. God alone satisfies.

The house is dark, one small lamp burning by the chair where I sit and read, write, think.

I watch the light begin to appear through the front window facing east, and I see the moon setting slowly in the west horizon.  God causes the universe to continue in it’s swirling.  He hung each planet and star and set them in their order.  He planned this place called earth for mankind.

I read the Psalms and pray them in a whisper, feeling faith rise in my heart because these are His words.  He gave them.  He is the One who will be faithful to complete them.

Let all those who take refuge in and put their trust in the one and only God rejoice.

Let them sing and shout for joy because God makes a covering over them and defends them.

Let those who love His name be joyful in Him and be in high spirits.

He is a warrior.  And He calls me to do battle with Him.  He provides the armor for my protection.  He has worn it and proven it strong enough for me.

Let God arise and His enemies be scattered.  He is victorious!

And so I will rejoice.

We walked down the gently sloping hill into the flat plain below, a group of us, and I was among the oldest in the group. Making careful progress, someone said to me that the climb back up would be harder.

After we completed our exercise, the group turned toward the hill that now didn’t look quite so gentle to me.  It appeared more daunting.  I anticipated the struggle as we began to climb upward.

Just then a man walked up beside me and offered me his arm.  He is young, young enough to be my son.  He is strong from working out in the gym.  And he is surefooted.

Holding to his muscled arm, I suddenly felt able, assured that I would make it up this hill, even if it was a challenge and my breathing would be heavy by the end.  Because now I didn’t walk alone.  I walked with a companion who was bigger than me.  He was capable.  He was tenacious.  And suddenly I was secure.

How often we are faced with a hill, a mountain, something that looks unattainable or even unimaginable.  We start the climb and wonder if we will make it to the top.

And then we feel the strong arm of the Lord offered to us.

His arm is endowed with power.   His hand is strong.  His right hand is exalted.

We never walk alone, though honestly, sometimes it has seemed as if I were deserted and abandoned.  But the truth is I am not alone.  And in my weakness, the strong arm of the Lord is ever present to give me strength, to make me sure-footed, to catch me when I slip.

I will sing of the Lord’s great love forever.  I will tell of His faithfulness.  I will declare that His love stands firm forever.

He is a sure and stable friend and Savior, and He will take me to higher ground.

Even if He has to pick me up and carry me.