The topic of conversation in February has been the weather. It has been unusual to say the least. We had icy temperatures and days that felt on the verge of summer, breaking records as the sun shone on us warm and cheery. I saw someone cutting grass with a push mower. Really.

Flowers are blooming, trees are greening, birds are singing, and it feels like mid-March not the end of February. It was glorious, though strange, as if something is up. Makes me wonder what will be next.

The geese in the lake across the road paired up and felt frisky. Maisie and I were entertained during our walks as the males dominated and tested each other. Let’s just say there was a whole lot of honking going on. There is one lone goose among the several pairs. I read that Canadian geese are monogamous, staying with the same mate for life. I felt sad for the single goose, wondering what happened to his gander, hoping that another single one would come along and they would find each other.

I spotted two hawks in the back of the house where the little woods are. They are a rare treat. Whenever I see them, I stop what I’m doing and just watch until they fly out of sight. I’m really hoping for some nestlings right in my back yard this year.

Sweet William and I hosted a Cousins Lunch here at the Wright House. We have become the “older generation” now, all of us baby boomers. It was a fun and entertaining afternoon. We are strong-willed, opinionated and not afraid to express ourselves. At the same time we share core values we hold dear, fundamentals, like our faith in Christ. Plus we are all good cooks.

We celebrated Maisie’s one year adoption anniversary by having her teeth cleaned, shots renewed and a few test and an exam. Now that I think of it, that wasn’t much fun for her. After we picked her up from the vet, she was wiped out for the rest of the day. Bless her heart.

I’ve not finished many books this month, probably because I’m reading too many at one time. I tend to do that, having one devotional book for early mornings, an easy novel at bedtime, and another to pick up at odd times during the day. I don’t know why I do that. I read recently of one blogger who is trying to read one book at a time, instead of several like me. I probably need to try that myself.

I had the distinct privilege of reading to some delightful kindergartners and second graders at a local school. The librarian invited a number of guest readers that week. The librarian is a younger friend of mine. My first memory of her was when she came with her her mother to bring the older sister to my house for piano lessons. My friend was just a young child, her long, dark, pony tail bobby along. Our paths crossed over the years. She was in a youth group I worked with for awhile. Later I was her supervisor at the YMCA. Finally we were on the same level, adult to adult, and the fruit of friendship developed. When I think of the progression of this precious relationship, I am deeply grateful.

I got to hear Liz Curtis Higgs live spreading her gift of laughter. What a joy-filled person she is, her humor infectious. She lives life with a smile and a funny story. The evening was made all the better by having girlfriends alongside me.  I know Mrs. Higgs’ life is not all fun and games. She tells the sad and disappointing parts, but she looks for the grace and the blessing and sees the world through eyes of hope.

I had a couple of teen girls visit one Saturday afternoon. We ate Pizza and had cookies and ice cream for dessert. It was a delightful couple of hours, our words flowing back and forth, around and around. The young women are intelligent, articulate, caring, and respectful. My hope for this generation bumped up a few points after spending time with them.

Sweet William and I finished a few small projects during the month. Some of them have been languishing for much too long. We needed to set our minds to the task and just do it. So we did, and then I wondered why we let them go all those months.

I began memorizing Scripture in earnest with a friend, us holding each other accountable and spurring one another onward. I’ve not been so diligent about memorization since I was in children’s church and prizes were given for it.  I wasn’t even sure my brain could do it at this age. But I am doing it. What is even more surprising is what a rich and rewarding experience it is. As the Word is truly hidden in my heart, it comes forth in a fresh and meaningful way.

In the middle of February I remembered the anniversary of my mother’s death and was staggered to realize I’ve lived half of my life without her. When she died at 62 years old, I thought it was too soon for her to leave us and I didn’t know how I would live without her. But I did. I lived and grew and stretched and learned to depend on God even more. He is sovereign and I will never fully comprehend His ways. There comes a time when I have to stop trying to understand and simply trust His purpose, His wisdom, His goodness.

February has never been one of my favorite months. It is sandwiched between the month of new beginnings and the month of spring. But this year, February offered so many good things to me. It’s probably been like that every February, but this year I had eyes to behold them a little clearer.

Oh that I may have such clarity every day of the year. 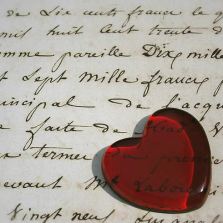 One thought on “February ending”