Day 17 of 40 days to Resurrection day

Watch the old classic movie The Ten Commandments (with Charlton Heston as Moses). 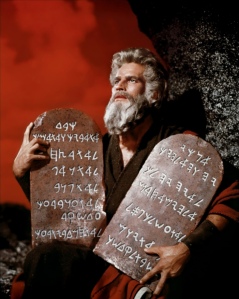 The Ten Commandments hit the silver screen in 1956, produced by Cecil B. DeMille with his “cast of thousands.”  It was epic in its day, lasting 3 hours and 31 minutes and needing an intermission. While it stands in the shadow of today’s high-tech animation and movie scenes that make us wonder what’s real and what isn’t, The Ten Commandments was still an amazing accomplishment for the mid-twentieth century.  It fostered many a conversation.  How did DeMille make it look like the water of the Red Sea stood as a wall while the actors and actress portraying the children of Israel walked through it to the other side?

The story takes us through the beginning chapters of the book of Exodus, and while it weaves a fictional story within the Biblical account, it stays fairly true to the Scriptures, something I can’t say for a lot of movies coming out of Hollywood.

One of my favorite scenes is the night of Passover, the shadow of the destroyer hovering over and through the streets of Egypt.  The scene shifts to the home of Aaron and Miriam partaking of the lamb, the unleavened bread, and bitter herbs.  The mournful sound of the Psalms is appropriate background for what is taking place in the land of the Nile.

The law of God remains the same today as when it was given to Moses.  God has high standards and requires holiness of action,  thought, and motive.  If only we could keep the law.  But we cannot.  Enter Grace.  Mercy.  Forgiveness.  All of this is from the hand of a God who can divide a sea and love us in spite of ourselves.

So catch a rerun of The Ten Commandments on TV or get a loan at the library.  Pop some corn and watch it as a family. Discuss what is Scriptural and what is fictional.  See what conversation comes from the time spent together.

Deuteronomy, another book written by Moses, records an important command to parents to tell their children what God did for them all through the day and all along the way.  It is just as important for us today, for parents and grandparents, for teachers and influencers of young minds.  We must tell them about a God who loves them and a Savior who died for them.  We must.

Even an old movie can give us an opportunity to talk about an amazing God.

Revised and re-posted from March 2014