Day 5 of 40 Days to Passover and Resurrection Weekend 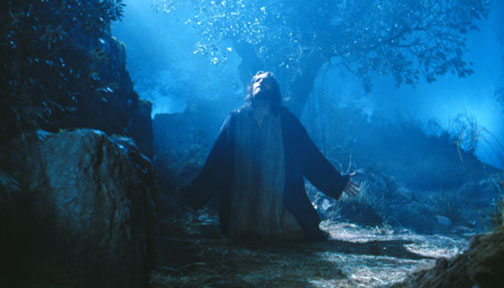 from The Passion of the Christ movie

I had to watch some of The Passion of the Christ last night even though it’s number 28 on the “40 days” list.  It’s the only way I can get even a glimpse into what Jesus endured to become my Savior.

His suffering is apparent from the very first scene, Him in the garden alone with His Father, agonizing in pray for relief.  One disciple remarks to another, “What’s wrong with him?  He seems afraid.”

These who had walked with Him for three years had never seen Jesus shrink in fear.  He had faced down the Pharisees and teachers of the law.  He spoke with an authority that shocked and amazed people.  He had no fear of wind and storm or the demonic living in graveyards.

How could the Son of God be afraid?

Yet, that is how it appears, at least in the movie.  Already Jesus seems to feel the weight of all sin-soaked humanity, blood-dropping sweat revealing His battles to do the will of God.  Satan appears, offering Him an easier way, a way out of the suffering that Jesus knows is ahead of Him.

The scene changes.  Jesus stands resolute.  His gaze fixed upon the cross that will come.  His crushing blow to the head of the serpent demonstrates a triumphant act of courage and determination.

The Son of God, the Darling of Heaven, the very Word who was and is and is to come becomes a Savior.  Our Savior.  My Savior.

He was beaten.  He was bruised.  He was wounded.  He was mocked.  He was humiliated.  He was forsaken.  He bore my horrible sin.  He did it for me.

Who believes what we’ve heard and seen?
Who would have thought God’s saving power would look like this?

The servant grew up before God—a scrawny seedling,
a scrubby plant in a parched field.
There was nothing attractive about him,
nothing to cause us to take a second look.
He was looked down on and passed over,
a man who suffered, who knew pain firsthand.
One look at him and people turned away.
We looked down on him, thought he was scum.
But the fact is, it was our pains he carried—
our disfigurements, all the things wrong with us.
We thought he brought it on himself,
that God was punishing him for his own failures.
But it was our sins that did that to him,
that ripped and tore and crushed him—our sins!
He took the punishment, and that made us whole.
Through his bruises we get healed.
We’re all like sheep who’ve wandered off and gotten lost.
We’ve all done our own thing, gone our own way.
And God has piled all our sins, everything we’ve done wrong,
on him, on him.

He was beaten, he was tortured,
but he didn’t say a word.
Like a lamb taken to be slaughtered
and like a sheep being sheared,
he took it all in silence.
Justice miscarried, and he was led off—
and did anyone really know what was happening?
He died without a thought for his own welfare,
beaten bloody for the sins of my people.
They buried him with the wicked,
threw him in a grave with a rich man,
Even though he’d never hurt a soul
or said one word that wasn’t true.

Still, it’s what God had in mind all along,
to crush him with pain.
The plan was that he give himself as an offering for sin
so that he’d see life come from it—life, life, and more life.
And God’s plan will deeply prosper through him.

Out of that terrible travail of soul,
he’ll see that it’s worth it and be glad he did it.
Through what he experienced, my righteous one, my servant,
will make many “righteous ones,”
as he himself carries the burden of their sins.
Therefore I’ll reward him extravagantly—
the best of everything, the highest honors—
Because he looked death in the face and didn’t flinch,
because he embraced the company of the lowest.
He took on his own shoulders the sin of the many,
he took up the cause of all the black sheep.

It’s not too late for you to join us on this journey.  Jump right in.

If you would like to download a copy of the “40 Days to Passover and Resurrection Weekend, please do so.  And let us know you are journeying with us.